What are magnetic encoders? 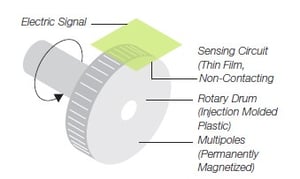 Magnetic encoders are a type of rotary encoder that use sensors to identify changes in magnetic fields from a rotating magnetized wheel or ring.

There are 3 major components in a magnetic encoder:

As the wheel or ring spins past the magnetic sensor, the poles cause a predictable response in the sensor based on the strength of the magnetic field. The magnetic response is fed through a signal conditioning electrical circuit and output as a digital signal to the controlling device.

The number of magnetized pole pairs on the wheel pole, the number of sensors, and the type of electrical circuit all work together to determine the resolution of the magnetic encoder. The key to using magnetism as the element to produce a signal is that it is unaffected by very demanding environments – including dust, moisture, and extreme temperatures, and shock.

How Do Magnetic Rotary Encoders Work?

The simplest form of a magnetic encoder is a variable-reluctance rotary sensor or magnetic pickup, which consists of a magnetic sensor and a ferromagnetic gear with teeth. When the teeth move past the sensor, the changing magnetic field generates a voltage pulse, which can be converted to speed.

While this type of magnetic rotary encoder is simple and affordable, the output resolution is mechanically limited by the number of gear teeth, limiting typical resolution to 120 or 240 pulses per revolution (PPR).

A magneto-resistive sensor consists of an array of patterned thin-film resistors fixed along a wheel or ring with alternative magnetic domains. As the wheel is rotated, the domains pass by the sensor array and the output resistance changes, which produces a sinusoidal signal.

Magneto-resistive encoders can achieve significantly higher resolutions compared to variable-reluctance magnetic encoders. However, magneto-resistive sensors are discrete sensors and are typically larger and difficult to integrate, adding to cost and complexity.

A Hall-effect sensor consists of a layer of semiconductor material, connected to a power supply. When a magnetic domain on a wheel or ring passes by a hall-effect sensor, the interaction generates a voltage spike. The amplitude and frequency of the magnetic perturbation can be used to determine speed and displacement.

Hall-effect magnetic encoders integrate both sensor and processor into the same chip and are therefore much more compact than magneto-resistive encoders. They offer higher resolutions and can be manufactured into an array to spread data capture across multiple detectors, averaging out errors and increasing sensitivity.

What are magnetic encoders used for? 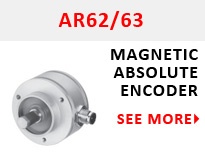