movement of a mechanical position of a tool or signal into an electrical signal that is measurable.

movement of a mechanical position of a tool or signal into an electrical signal that is measurable.  A full line of rotary shaft encoders, which respond to rotation, are available from  Dynapar. When used in conjunction with mechanical conversion devices, such as rank-and-pinions, measuring wheels or spindles, shaft encoders can also be used to measure linear movement, speed, velocity, distance and position.

DICG Dynapar Encoders, Northstar Encoders and Hengstler brand rotary encoders are available with both incremental and absolute outputs. Absolute encoders have as many tracks as it has output bits. The number of tracks on the disk determines the encoder's resolution, commonly expressed as cycles per revolution (CPR). Incremental encoders generate a stream of pulses as the shaft rotates specified in pulses per revolution (PPR). These pulses can be used to measure speed or be fed to a counter to keep track of position. Incremental Rotary encoders can be optical, using a scale or disk with just one or two rows, or magnetic, using several different magnetic sensing technologies.

The most basic type of incremental encoder is a tachometer which has just one output and is most often used in unidirectional applications that track only position or speed information. As incremental encoders increase in complexity through bi-directional to quadrature, more types of motion control information can be provided. In a typical application, one or more encoders provide digital feedback to a controller in a motion control system. In addition to these applications, optical shaft encoders can also provide electronic commutation in brushless servo systems.

The major difference between an absolute encoder and an incremental encoder is that the absolute encoder keeps track of its position at all times, and provides it as soon as power is applied. This feature is particularly useful in applications where the equipment runs infrequently and/or has power turned off between uses. Incremental encoders, by comparison, does not provide any position information at startup, but merely keeps track of how far it has moved. The only way to determine the absolute position of incremental encoders is to set the equipment to a known reference position and then zero the counters.

Advantages: The biggest advantage of absolute and incremental encoders are that they are inherently digital, which means they can interface easily to modern control systems. An encoder sends digital quality signals back to the computer. There is no need for an engineer to get involved in the wiring and integration of signal electronics. In fact, many engineers are unfamiliar with resolver electronics – it is much easier to buy an encoder with a digital signal that is ready to go.

An encoder is also fast: some 12-bit optical encoders can provide a reading of absolute position on a shaft rotating at 12,000 rpm, and there are 12-bit magnetic encoders that can run at 30,000 rpm. As mentioned before, encoders are available with absolute or incremental output. Incremental encoder units find a great deal of use as tachometers because their spot-on digital output allows for more accurate speed control than is available from an analog tachometer. These devices are also void of the analog tach's brushes and therefor they have a longer life.

Disadvantages: The biggest limitations of encoders are that they can be fairly complex and contain some delicate parts. This makes them less tolerant of mechanical abuse and restricts their allowable temperature. One would be hard pressed to find an optical encoder that will survive beyond 120ºC.

Optical encoders can be harmed by contamination – their fine-pitch scales, LEDs and photodetectors can be put out of action by oil, dirt, or dust. Probably the biggest drawback to optical encoders are its reputation for mechanical fragility. The heart of most optical encoders is a thin glass disk that can be broken by excessive shock or misaligned by shock or severe vibration. Encoders traditionally have been complex electronic devices that contain integrated circuits as well as LEDs and photodetectors, and a severe electrical disturbance could damage them.

Advances: This situation has changed considerably over the last ten years. Just as incandescent indicator lamps have been replaced by long-life LEDs, the glass disks have been replaced by steel and plastic disks, and the encoder electronics are more integrated and thus more durable. All of the advancements mentioned are making them more reliable and popular for heavy duty applications. In addition, encoders are now available that use magnetic technology. These heavy duty magnetostrictive encoders can stand environments just about as hostile as a resolver can, and still provide the easy integration of an encoder. However, they are incremental encoders, whereas resolvers provide absolute position information.

Northstar magnetic encoders utilize magnetic sensing technology that is highly resistant to dust, grease, moisture, shock, vibration and other contaminants common in industrial environments. Ideal for industrial manufacturers where accurate measuring and controlling the speed of machinery is critical in their day-to-day operations (see Figure 1 ).

For process industries, the choice of tachometers is an important decision that can directly impact a mill's profitability. NorthStar digital tachometers perform reliably and deliver accurate results in tough, industrial applications throughout the world.

NorthStar RIM and SLIM Tach®s feature a magnetic pulse wheel that is imprinted with numerous, small magnetic poles (see Figure 2). This wheel, which works with an integrated MR sensor, creates magnetic fields which effectively penetrate any mill related contaminants such as dust, dirt or oil.

Powerful, Precise Digital Pulse: As the magnetic pulse wheel rotates with the machine shaft, an alternating pattern of north-south magnetic fields are created for the MR sensor to target. The sensor responds by changing its resistance. These changes are processed through an electrical circuit to provide a powerful digital pulse for precise motion measurement.

Accurate Permalloy MR Sensor: The MR sensor consists of a combination of resistors (see Figure 3 ), which change resistance with the application of a magnetic field. Permalloy (NiFe) is used as the active magnetoresistive layer.

A resolver to-digital converter (generally mounted in the equipment to which the resolver is connected) compares the two voltages to give a highly accurate value of theta. Resolvers are available with accuracies of 7 minutes of angle (equivalent to 1 part in 3,085, or 11 bits of resolution), and some are good to 3 minutes of angle (1 part in 7,200, or a better than 12 bits resolution). Some resolver-to-digital converters can interpolate results to give 16 bit output. Resolvers are available for speeds of 10,000 rpm, and are often used as the position sensing element in brushless DC motors.

Advantages: The biggest advantage of a resolver is that it's very rugged. It can survive anywhere an electric motor can survive, and will ignore shock and vibration that would knock out even a heavy-duty encoder. Resolvers are available with shock ratings to 200 g and vibration to 40 g. They're also very resistant to both nuclear radiation and electrical disturbances.

Compare this to one of the more rugged Dynapar optical rotary encoders (the Danaher ACURO Drive-M series), which is rated for shock of 100 g and vibration of 10 g from 10 to 2000 Hz. Heavy magnetostrictive incremental units are available that can stand vibration of 18 g. While it takes a pretty tough optical encoder to survive at 120ºC or more (and temperatures that high tend to shorten the life of the electronics inside the encoder), resolvers are available that will operate at 220ºC. They also have long lives. The rotor can be excited using a rotary transformer, which means there are no brushes, so the resolver's lifetime is limited only by its bearings. (Harowe Size 11 resolver shown here is available with either rotor or stator as primary and accuracy as close as 6 minutes of angle.) Since a resolver has no fine-pitch gratings through which light must pass, it can tolerate dust and dirt that would put an optical encoder out of action.

Resolvers have one more advantage: they're inexpensive. Since they're built very much like motors, they can be made with automated equipment that keeps the price down.

Disadvantages: Resolvers are not without their own drawbacks. The biggest is the need for interfacing electronics. The conversion of a resolver output to digital is far more complex than an analog to digital conversion. First, an oscillator sends a sine wave interrogation signal to the resolver. Second, the sensor modifies the signal, which then has to be interpreted into a series of sine waves. Finally, the signal is interpolated into a digital signal. The cost of the electronics to do all this can be three to five times the cost of the resolver itself.

Another downside of resolvers is their limitations in speed and speed range. While many resolvers can run at 10,000 rpm, there is some falloff in position accuracy during rapid changes in speed. Depending on the resolver-to-digital converter used, a resolver can give a speed range of 200:1, whereas an encoder can provide a speed range of better than 100,000:1. Speed range may be a concern when using resolvers as the feedback element to a servomotor.

Steps in Selecting the Right Dynapar Encoder or Resolver: Both optical encoders and resolvers are highly accurate feedback devices; the choice of which to use in a particular application depends to a large extent on the environment. Where conditions are reasonable and ease of integration is important, an optical encoder works well. When things get rough or hot or dirty and durability is the most important factor, a magnetic encoder or resolver is often the best bet. The decision is also sometimes a personal one. Some engineers prefer resolvers and others prefer encoders, but resolvers now account for less than half of the heavy-duty market for feedback devices, mostly because of improvements in encoder reliability. 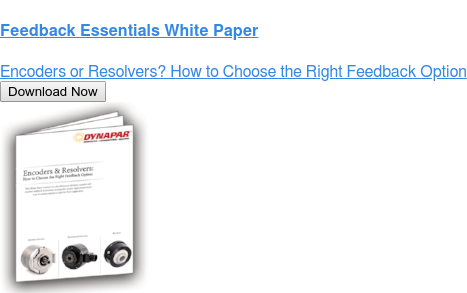